We have started a consultation into extending and relaunching the existing Tamar Valley Discovery Trail, to create a new 90-mile Cornish walking route in the Tamar Valley Area of Outstanding Natural Beauty (AONB). The ‘Tamara Coast to Coast walk’ would create a footpath stretching from the South to the North Coast and create a new circular walk around the coast of Cornwall. If approved, the route would open in the Spring of 2023. 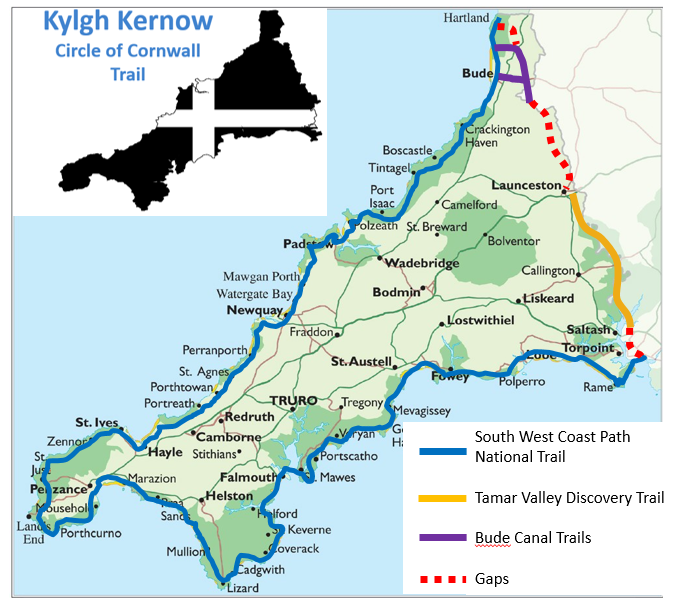 Currently the Tamar Valley Discovery Trail runs from Tamerton Foliot to Launceston. The proposed new route would extend this at each end to create a coast-to-coast walking route broadly following the River Tamar. As well as being a stand-alone 7-day walking trail, the Tamara C2C would in conjunction with the South West Coast Path create a walking trail around the whole of Cornwall which could be called ‘Kylgh Kernow’ (Cornish for Circuit of Cornwall).

Potential routes for the coast-to-coast section were surveyed during Autumn 2019 and a route was found that is safe, attractive to walk and which passes through many places rich in natural or man-made heritage.

Ideally, the whole route would be off-road, but the limitations of the rights of way network means that this is not always possible. However, it is hoped that improvements could be made through the creation of new permissive or permanent paths.

Alongside the development of the Tamara C2C Walk, we also aim to provide information about and promote a series of short circular walks along the entire Tamar Valley. Details of these are also included within the Consultation Report.

The source of the River Tamar

The source of the iconic River Tamar, a spring on Wooley Moor, currently goes unnoticed. Proposals include introducing a stone on the road verge of the moor to mark its source. We would like to work with the local community and artists to develop a worthy design for this important landmark. Proposed designs currently include a natural granite slab inset with carved slate showing the route of the Tamar with text in Cornish and English.

If you have any questions, comments or suggestions on these proposals, please contact Mark Owen who is leading on the route development and consultation on behalf of the Tamara Landscape Partnership Scheme at: countrysiderecreationservices@mail.com.